By the end of the seminar Social Network Analysis, which I offer for example as part of the supplementary programme Data Literacy at the University of Bayreuth, our students produce great seminar papers that need to be shown to a greater audience.

In the seminar, students are asked to work on self-selected research questions using methods of network analysis. The methods are new to the students in that they never worked with them before. That's why the seminar consists of some introductory part in which the methods are presented and their applicability using R is discussed. Students then formulate an appropriate research question, find or create a data set, and apply the newly acquired methods to the data set.

In the vast majority of cases, students have had no prior exposure to programming. This means that in the seminar they not only learn to apply the methods for network analysis in R, but often teach themselves basic skills in R as well.

Below, you find some of the posters that have been created over time. 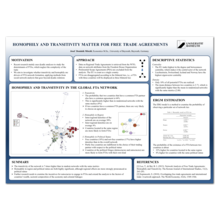 This work investigates whether transitivity and homophily are drivers of free trade agreements (FTA) network formation. Using data from the WTO’s Regional Trade Agreements Database from 1960-2020, we find strong empirical evidence that the formation of the FTA network is influenced by both factors. We investigate evidence for homophiliy and transitivity using both basic social network analysis techniques as well as the exponential random graph (ERG) model. 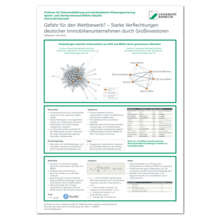 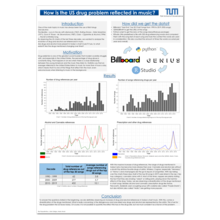 How is the US drug problem reflected in music?
Ilias Papadimitrou, Julien Deligny, Mario Amah

Drug addiction is one of the greatest social troubles that modern societies struggle with, and especially in the United States, the percentage of drug abuse is constantly rising. It is said that music is one of the things that affect young people the most, even subconsciously when listening to music in the background. By observing the US charts of the last three decades, we wanted to analyze the evolution of drug and alcohol use referenced in music. Are drugs and alcohol more present in today’s chart music? If yes, to what extent? Are the drugs mentioned changing over time? 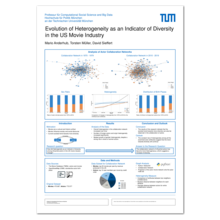 Evolution of Heterogeneity as an Indicator of Diversity in the US Movie Industry
Mario Anderhub, Torsten Müller, David Sieffert

Feature films reflect and influence society. They are a cultural artifact. In this paper, we address the question of the extent to which the social trend toward diversity and inclusion is made visible in the film industry. To this end, we ask ourselves the question: How did the composition of movie casts change in terms of gender, age and origin and is the societal trend towards more diversity reflected on movie sets? We collected data about movies and actors from The Movie Database, instantiated a movie collaboration network, and analyzed the network in terms of diversity and heterogeneity of dyads. 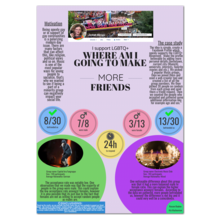 I support LGBTQ+ - Where Am I Going to Make More Friends
Rossen Boykov, Ata Mazloumian

Being openly gay or in support of gay communities is a polarizing modern day issue. There are many factors that can affect this, like religion, political views and so on. Music is one of the most popular ways for young people to socialize, that's why we wanted to see if being a part of a minority group can negatively impact your social life.