You probably know git. It's a version control system, a collaboration platform, and so much more. I recently used it as a step-by-step tutorial platform to illustrate a how-to in programming. Please find it on github.

I was asked to give a talk about Building Packages for R and Python at the 2019 edition of the openmunich conference. The aim of my talk was to advertize developing algorithms in C++ because it is then very easy to port them to python and R with as little additional code as possible by using Boost.python (the link points to the latest release of Boost, but Boost.python is actually a part of Boost for some time now...) and Rcpp.

During my talk I wanted to demonstrate how to build a minimal viable library for both python and R. Of course, PowerPoint is not the right tool to show that. That's why I put together a git to accompany my talk which contains a step-by-step tutorial from a simple C++ program to usable python- and R-libraries. You can find it on github.

How is a git repo suitable for a step-by-step tutorial? Short answer: tags. 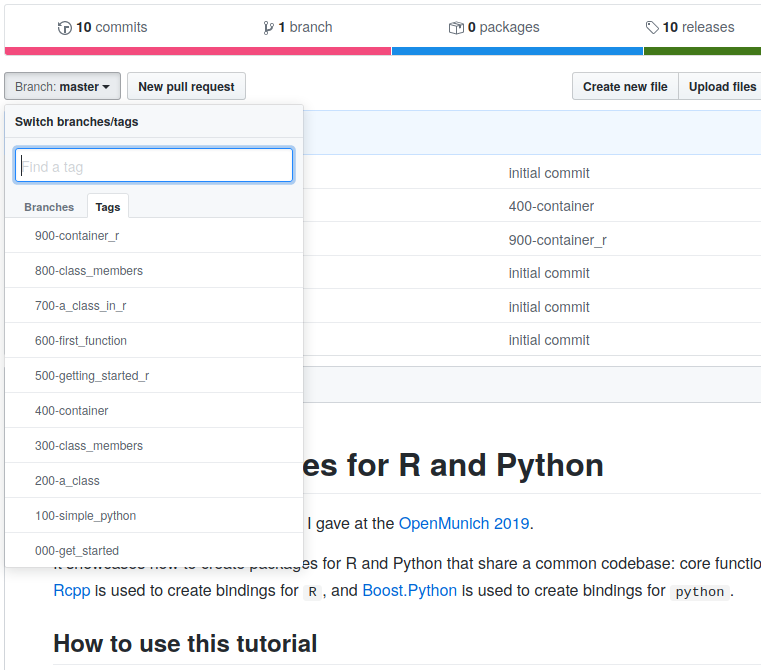 On github, you can access tags using the Branch-button. Also, tags automatically appear as releases.

Many open source projects use tags to label certain commits and, thereby, mark a release of their software. You can use these tags to checkout specific commits and get a copy of a certain version of the software.

In my case, I used tags to point to certain steps of the tutorial. That way, participants were able to inspect a particular step by checking out the corresponding tag. At that "point in time", the repository contains a viable version of the program, or the library, that actually compiles and works. The only question is: How to put together such a git?

Although the scope of the tutorial was small, it contained 10 steps, and, hence, 10 commits to the repo. Enough for me to pull out some bash magic and automate the process of creating the git. What do we need for this?

This is all my bash script needs to automate the process. The script will add initial files, it will add and delete files belonging to certain commits, and it will turn on and off parts of committed files. Of course, it also sets tags correct.

A crucial part of automating this is to hide parts of the final source code in earlier steps of the tutorial. For example, the code of a very basic python module looks like this:

Throughout the tutorial, more and more lines will be added:

From these implicit tags, a taglist is created automatically by collecting the annotations and sorting them alphabetically. The resulting tag list effectively shows the steps of the tutorial:

This order also configures which code blocks refer to earlier commits and should stay for later stages. For example, when preparing the source file for 300-class_members, all code from 100-simple_python and 200-a_class should remain visible, of course. Generally, this is done via awk (The link takes you to the relevant section of create_course_git, if you're interested).

From the final course git, participants can checkout git checkout 100-simple_python and have a copy of the first code listing in their local git. Later, they will run git checkout 300-class_members and have the second code listing to work with.

In relation to the above-mentioned tag list, the two files commits_thefiles and commits_thefiles_delete state which files should be added and deleted for which commit (only the first file is created automatically). Since both use the same syntax, this is an excerpt from commits_thefiles:

So, starting from the final version of your tutorial, the corresponding course git fills with new files and new file content. The only question remains: how can you use it?

First of all, get the scripts on github. Then, put together your final source code, and: